Unlike the other churches in the Canalside Benefice, St. Mary's has no medieval roots. It was opened in 1889, as a chapel of ease to St Michaels, Hilperton, although in 1954 it became a part of the parish of Staverton. In 2020 the parish of Hilperton and Staverton was formed with both St Michael's and St Mary's as centres of worship for the parish. 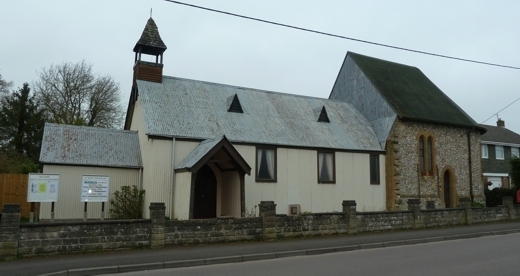 The building of St Marys was begun in 1889, as St Michaels was frequently over-crowded on a Sunday. The Clark family of Wyke House were leading advocates of the cause; the newly appointed rector, Rev S.T Wood, was able to raise the money required - between £200 and £300 - by subscription. They were influenced by the Anglo-Catholic Oxford Movement, seeking the beauty of holiness through greater reverence and more elaborate ritual in services.

The land for the building was given by W.H. Long, who was the patron of the living. There was only sufficient money initially to pay for a nave constructed from a pre-fabricated kit supplied by Harrods. Under the supervision of the diocesan architect, Mr. Ponting, the kit was erected in three weeks. Is that a record for building a church? The cost was £150. Much of the work was actually done by local agricultural labourers, assisted by the horses of neighbouring farmers. The labourers had been amongst those pressing for a new church, and subsequently formed the congregation.

The new building was opened on 5th October 1889. Originally, there were no seats, and the congregation had to stand for services. The rector wrote in 1895 that ‘we look forward to a permanent church standing there someday'. Subsequently, sufficient money was raised to build a chancel. The contract for this was signed by Edward Linzey on 24th February 1899. The architect was Mr E. Doran Webb of Salisbury. The building was to be of flint, in the old English style. The foundation stone was laid on 26th April 1899 by Mrs Wood, the wife of the rector, and blessed by Bishop Mylne, formerly of Bombay. It was dedicated by the Bishop of Salisbury in the following October.

St Mary's was long known for the richness of its high church ceremonial. As a ‘hall' church; the chancel is used for worship, with the possibility of over-flow into the hall. The hall is used for a variety of community activities. St Mary's is frequently referred to as the tin church.

For the genealogist, marriages are recorded in the St Paul's register, now in the Wiltshire & Swindon History Centre. Baptism and burial registers are still held by the church.