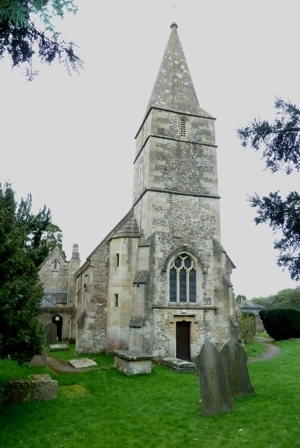 Although on the edge of Trowbridge, Hilperton still retains its special village atmosphere. St Michael's Church has been a key building in the centre of the village for a very long time and continues to be so in the 21st Century.

The earliest recorded mention of St Michael's was in 1291, when it was valued at £5. The Long family were patrons of the living from the sixteenth century, as they were in Whaddon. The church was not well supported in the late seventeenth century. There were 35 nonconformists in 1676. James Garth, the then rector, was not popular. He tried to control popular pastimes, and thought that irreligion was endemic. It is unlikely, however, that he endeared himself to them by suing them for tithes. In 1690, Garth said that there were a mere twelve communicants in a parish of over 200.
Two hundred years later, the opposite was true. Congregations were large, so much so that the church was able to undertake major rebuildings, and founded a daughter church at Hilperton Marsh.

Increasing population in the mid-nineteenth century meant that the old church had insufficient room. It seated 102, but the population was 996. Consequently, it was taken down and completely rebuilt in 1848. The new building was basically a reproduction of the original fourteenth-century building, but with a longer nave and different windows. Stone from the old church was re-used, and monumental tablets were re-placed, together with the 1771 arms of George III. The thirteenth-century tower is the only part of the medieval church still standing; four of the six bells are seventeenth-century. The probably fifteenth-century oak door was not re-used, but still leans against the wall at the back of the church.

The cost of re-building was £1100; £300 was contributed by the patron, Walter Long, £50 by the rector, and £100 from the church rate. The remainder was to be raised by the Incorporated Church Building Society, and from voluntary contributions. The building was designed by T.H.Wyatt, an eminent architect who was responsible for numerous other church buildings (see en.wikipedia.org/wiki/Wyatt_family ). The re-building is a tribute to the faith of a worshipping community.

Further enlargements took place in 1894, when the vestry was enlarged to incorporate the organ, and new pews were installed. Plans for a new north aisle were not, however, proceeded with. At the same time, a twelfth century font was brought from Whaddon, replacing the one that had been installed in 1848. The latter was donated to St Mary Magdalene, Hilperton Marsh, when it was opened in 1899. The connections between our churches were as important then as they are now.

In the twentieth century, two more bells were hung in 1909, electric lighting was installed in 1931, and a parish room was built in 1990. Ecumenical unity was promoted when Hilperton Methodists began using the church for their services in 1988.

Parish registers date from 1694, and are complete; they have been published by Wiltshire Family History Society www.wiltshirefhs.co.uk . There are some earlier bishops' transcripts. Some marriages are transcribed at: