Whaddon church lies just over a mile north of Hilperton, at the end of a long lane which is now a dead-end for motor vehicles. Once it led further; a footpath leads to a packhorse bridge across the Avon which was sufficiently important to be repaired by the county in the eighteenth century. The village was once larger; the humps and hollows of old house sites can still be seen close to the church. 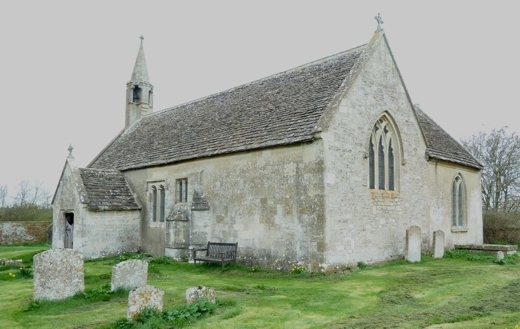 The church - the congregation of the faithful - has worshipped here since at least the twelfth century, when the building was constructed, and possibly for much longer.
There have been many changes over the centuries. The nave of the church, dedicated to St Mary the Virgin (although that is a matter of dispute), was erected in the twelfth century, and altered two centuries later. In the 16thC the roodloft was taken down, and the stairs to them blocked off. At some stage, a twelfth century font was also removed from the church, and can now be seen at Hilperton.

Since then, the chancel has been pulled down and rebuilt on three occasions. The present chancel, with the porch, was erected in 1879; a bell cote was built at the same time. The work was instigated by W.P.Long, whose nineteenth-century family mausoleum stands in a small chapel to the north of the chantry. It contains an elaborate marble monument to Walter Long (d. 1807). There are various other memorials to the Long family, who became manorial lords of Whaddon in 1555.
Church life at Whaddon has not always been uncontroversial. In 1656, the rector was ejected by the puritans, and replaced by a ‘public preacher', Martin Brunker, a man of ‘holy and good conversation. But the Rector was re-instated after the Restoration.
By contrast, attendance in the early twentieth century was substantial; so many tried to attend the 1907 harvest festival that the service had to be conducted outside, with the rector using a tombstone as a pulpit.

Whaddon remained a separate ecclesiastical parish until 1854, when it merged with Hilperton. In 1894, it became a part of the civil parish of Semington. More recently, it has become a part of the Canalside Benefice.

Parish registers of baptisms, marriages and burials survive from 1653, with some gaps; they have been published by Wiltshire Family History Society www.wiltshirefhs.co.uk. Some entries are transcribed at: