Fifteenth century churches abound, and include Semington's St George's. The village was a part of the parish of Steeple Ashton, although it had its own chaplain at least from 1370. It probably also had its own chapel; there is still a probably thirteenth-century inscribed stone in the porch. It is written in old French, and requests prayers for the soul of Philippa de Salcest (Sauser). If there was a chapel, it was replaced in the fifteenth and early sixteenth centuries, demonstrating that the villagers of Semington were keen to provide for the worship of God. 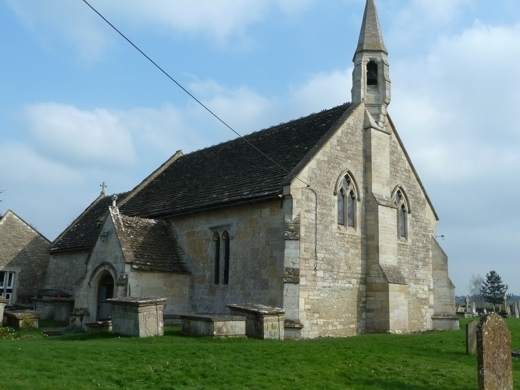 In 1470, the Bishop had to settle a dispute between the vicar of Steeple Ashton and the people of Semington, concerning the cost of its services. He ordered the vicar to ensure that mass was celebrated every Sunday, either by himself, or by a suitable chaplain; in return, the inhabitants were to pay him twenty shillings per year, in addition to the usual tithes. The dedication to St George is first mentioned at this date, and it seems probable that the ‘dispute' arose when the new chapel was built. Perhaps the action was collusive, in order to establish relations for the future. The nave and porch are from this period, although the chancel was probably built a few years later.

In 1597, property was conveyed to the church to keep the church in repair, and to relieve the poor. Five shillings from this charity was paid as a contribution to the re-building of St Pauls Cathedral in 1678; the parishioners contributed a further 3s 11d. Profits from the church house were also used to apprentice poor children, and to assist emigrants, as well as for the fabric. Some of the land was sold off and the proceeds invested; part of this capital was used in 1861, when the church underwent drastic renovation, and the current bell turret was erected.

The Semington chapelry only became a parish in its own right in 1981. At the same time, ecumenical unity was established in Semington when both Anglicans and Methodists created a Joint Parochial Church Council to share worship at St Georges.

Fuller details of our history can be found at:

The parish registers of Semington date from 1586, are held at Wiltshire and Swindon History Centre www.wshc.eu. Other parish records, for example, churchwardens' accounts from 1744, are also held. The registers have been published by Wiltshire Family History Society www.wiltshirefhs.co.uk . For more information, genealogists should visit: